Last week Sunday at this time, I was in the middle of sunny Poplar to take another guided walk. Poplar, you might ask- why? It’s easy. I have been to the area on two occasions in “interactive games” – one time at a treasure hunt with A Door In a  Wall in the Lansbury Estate and one time at an immersive Macbeth Theatre event in the Balfron Tower. In both occasions, i had become curious on what is behind these (on the first view) so grim masses of concrete. 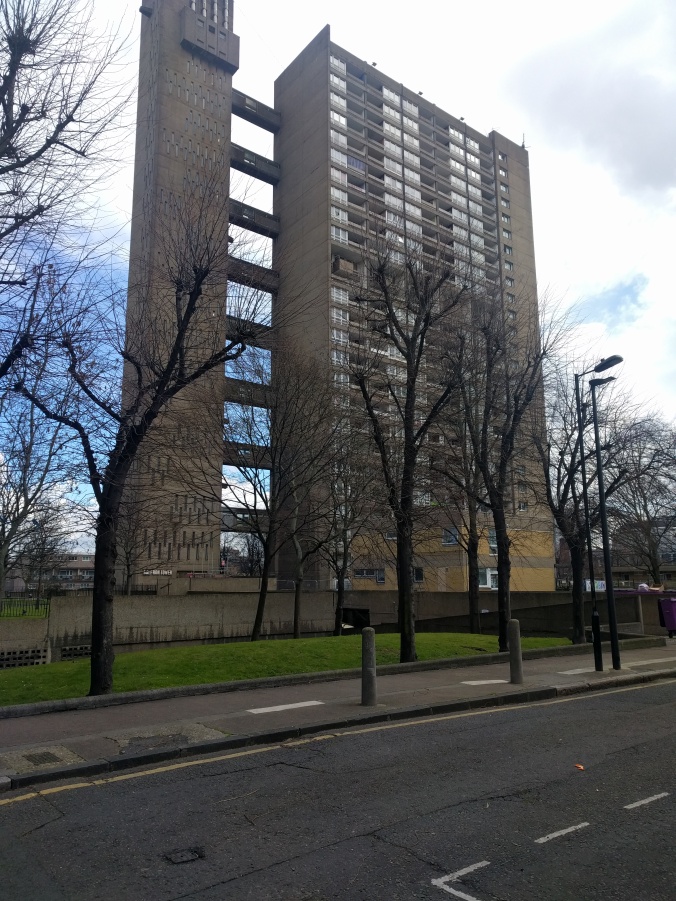 Balfron Tower is part of the Brownfield estate and one of Poplar’s most popular buildings.

Luckily for me, Andrew Parnell of Footprints of London is offering an architectural Walk through the social housing estates of Poplar, called “Stock Bricks to Brutalism: Housing Design History in Poplar” – so this was the perfect opportunity to learn more. Not that I am any expert in Architecture – far from it. But I am interested in seeing the design of housing, see patterns and ideas behind the planning and – how it has turned out in reality (and as Poplar Shows, the planned effects have not always been reached).

In the 2 hour walk, Andrew took us through 4 Major Estates in Poplar and talked about how the area had changed from a small village under the Jurisdiction of the Tower of London (Tower Hamlets) to a hub of industrial activity in the 1800s with the arrivals of the Docks – Mainly East India Dock and West India Dock all those labourers caused the area to grow to the size of around 60,000 people in 1920 already – in devastating living conditions.

The industrial character made it a target in both world wars, with especially heavy bombing damage in WWII, causing the area to be “comprehensively re-developed” after the war, with little consideration of the leftovers. 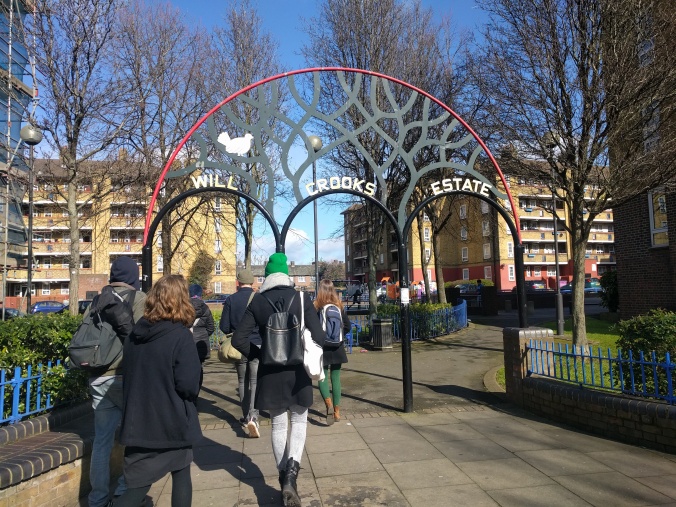 Entrance Gate of the Will Crooks Estate

Consequently, Poplar offers a rare opportunity to see (the remains of) different styles and philosophies of housing estates and Andrew was a master in explaining them all, pointing out little details and telling stories from the past. An important question that surfaced a few times during the walk is the “chicken and egg” problem of “Does Architecture cause a certain behaviour in people or do people behave in a certain way and architecture follows”? Especially the Brutalist Estates, foremost Balfron Tower and Robin Hood Gardens were designed for a “better living for the working classes” and have gotten a horrible reputation as hotspots of crime and social decay.

The Building gently curves with the Street 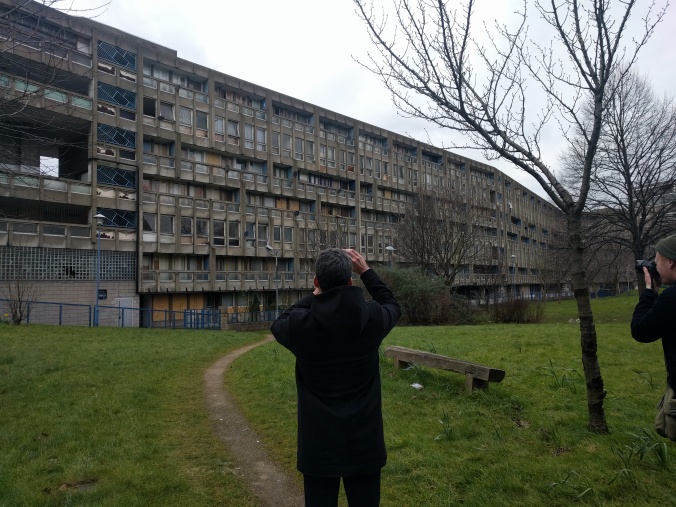 One of the two Flat Buildings at Robin Hood Gardens

If you are curious now and would like to join Andrew on one of his next walks, you are lucky – he’ll be guiding it again on

The walk costs £12 (£9 concessions) and is on a strictly pre-book base only. Book early, tickets are in demand. You can book here. You can find the official description of the walk on Footprints of London’s website (search for the date you want to go at).

Below are a few more pictures- with a small commentary. Enjoy! 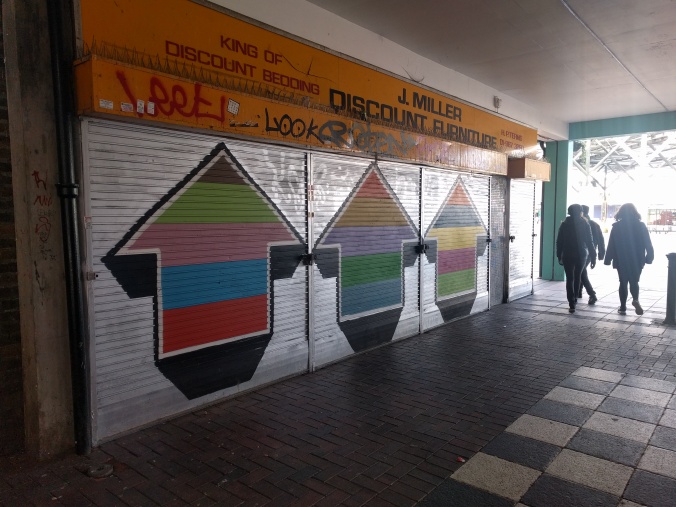 “Above” has painted these Shutters all over Chrisp Street Market

View from the Mound in the garden between the two flat buildings in Robin Hood Garden. The Mound was created to deter people / children from playing football to keep the garden silent. 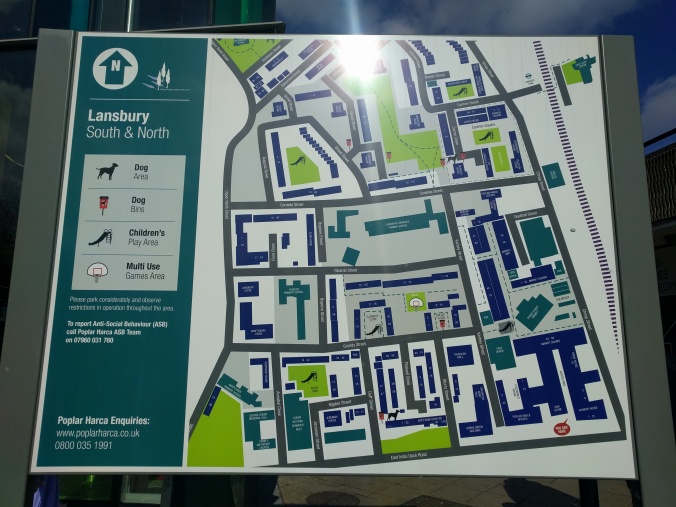 One of the many faces of Lansbury Estate – chunky residential towers with lower buildings on large open green space. Those spaces attraced antisocial behaviour and problems. 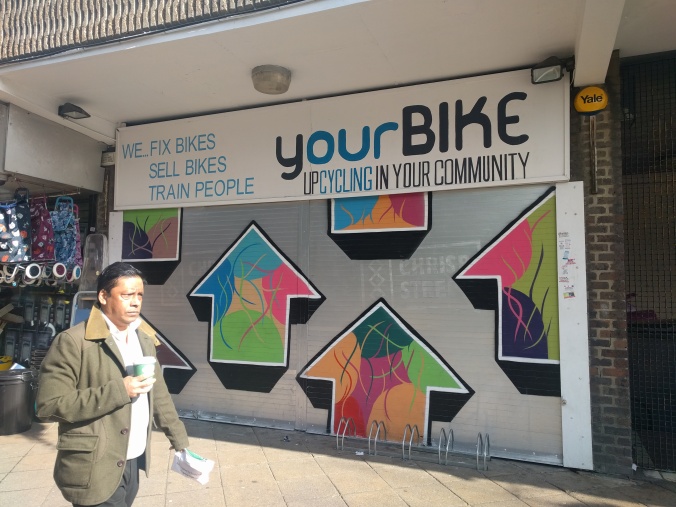 One of the 46 Shutters of Shops in Chrisp Street Market painted by American Street Artist “Above” in 2014. Chrisp market is struggling with empty shops and the need for regeneration but projects like the street art and shops like this are part to bring a brighter future