It’s Easter weekend! If the weather is good, the best way to digest all eggs and other delicacies from Easter Breakfast and Brunch and, and, and…. is to go out and get moving! (if the weather is bad, click here).

If you are looking for a nice place for your Easter Walk, search no longer but head North to Finsbury Park and go on the Parkland Walk!

The Parkland Walk is a stretch of green (really green- see on Google Maps below!) between Finsbury Park and Highgate following a disused railway line that used to run from Finsbury Park all the Way to Alexandra Palace. This Victorian Railway line was supposed to be integrated into the Northern line as a branch in the 1930s, but due to the war never was. In the 1950s and 1960s, the line closed down for passenger and freight traffic and in the 1970s, the tracks were taken away and most stations demolished (but not all!) . Due to local citizens campaigns this piece of nature was turned into a walking path and opened in 1984 and was granted natural reserve status in 1990 (the oldest of such reserves in London!).

The walk also forms part of the London Capital Ring between Finsbury Park and Highgate, so you can follow this signposting at all times.

In case you get lost (almost impossible) or simply want to know more about the park and its options, the Friends of the Parkland Walk have published a good Google map, you can find it here.

From Manor House station, head into Finsbury Park (on the East side) and cut straight to the park to the West. If you find them, you can follow the signposting of the Capital Ring Walk You should be seeing a small bridge to cross the rails coming from Finsbury Park. Head over the bridge and directly after, turn right on a small path. A sign should introduce the Parkland Walk.

From Finsbury Park station, cross the road and enter where you see the entrance to the bicycle park. 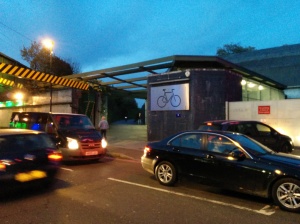 Follow this path and when it merges with the main road of the park, keep left. At one of the next intersections (2-3 min walk) you will see the railroad bridge on the left hand side. Head over the bridge and turn right onto the small path directly after.

Now you have arrived on the walk and you see a nice stretch of trees and green, a small forrest and for me it was unexpected to have this so close to the city. From here, its about 2 miles to Highgate. You will pass several old stations along the way (Stroud Green, Crouch End) and there will be several entry and exit points from the Parkland Walk into the neighbouring Areas (e.g. Crouch End Park). Its fun to trace the remainders of the railway, sometimes by seeing old station houses (Stroud Green) or even walking between disused platforms in Crouch End Station (sorry for the picture, the only time I thought about taking on, it was in the eerie twilight hours…). 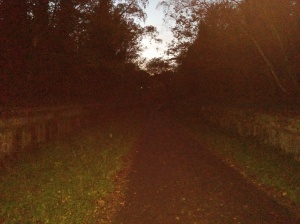 On the side towards the Highgate End, you still see old Railway Arches as well. Along the way, there are many information signs with info on the history, route, wildlife and nature to keep you entertained.

The walk ends just below Highgate Station – you can see it continuing into the old (and current) Tunnel system of Highgate station, but those are closed for walkers so you have to take a detour. Just follow the signposting to find your way out – its a steep uphill to Highgate station!

From Highgate station, you can easily go back wherever you need to be. However, if you had not had enough or want to pat yourself on the back, there are a few options to follow on….

Once you are at Highgate station, you have several options on what to do next

Cheers! (My finisher beer in the Wrestlers)