It’s a (hopefully not too rainy) weekend ahead, and its London Open House weekend. Before I even get started, I have a confession to make: as much as I love pretending I am an expert of all-that-is-London, Open House weekend is totally out of my expertise. Often, I have not been in town, and if I have, I was very unprepared. Usually, friends of mine are trying to win tickets for the hottest venues for us already months before in the lottery ticket system, but we are never successful. On the weekend, I found myself in some of the most absurd long Q’s at Battersea Power Station or elsewhere, so its not been such a success for me until now 🙂

However, it is a genuine and beloved highlight in the London events calendar, so I do want to give you a bit of background and one or the other tip of buildings to see.

So what is the London Open House weekend?

To celebrate and promote London’s architecture and design, more than 800 venues, many of them usually not open to the public, open their doors over this weekend. Thisincludes private homes, corporate buildings, government buildings, historic site- pretty much everything that goes under the vague notion of “house”. Some of the venues not only open up, but they also organise guided tours, talks, events etc. The weekend is organised by Open House, a non-for-profit organisation  to promote public awareness and appreciation of the capital’s building design and architecture.

How to be a part of the weekend?

This one is fairly easy – just search for a place to go, go, and queue. Or, if you are already on the road, look for signs / queues outside of buildings, get in line, and join the fun. A few caveats- some of the most popular buildings have (free) tickets, but those will be usually booked out. Same often goes for guided tours, so check before, but its always worth to ask. Lastly, expect massive queues (the one in Battersea Power Station in 2013 was more than 2km long….) – and if things get crazy, do not forget- this massive weekend is supported by a handful of enthusiastic volunteers, but sometimes it gets too much  to handle for them, so be patient.

If you have any more general questions, you can read Open House Weekend’s FAQ’s here. They also have a “Plan your weekend” section on their site that has heaps of information you might need. Find it here.

One of London’s grand houses in the Centre (located right next to Piccadilly Square) – from the outside, it does not look very grande and it seems squeezed into its environments. But once you go inside, there is a massive inside courtyard revealing the true size of this gem. It was built as one of the first large private mansions in London in the 1660s, but massively expanded in the 19th century (after the British govenrnment had bought it). Today it houses the Royal Academy of Arts, alongside with their fantastic exhibitions (AiWeiWei is opening today!). But it also houses the Geological Society of London, The Linnean Society of London, The Royal Astronomical Society, the Society of Antiquaries of London and the Royal Society of Chemistry. Inside, it has all the grandeur of a 19th century mansion, and the Royal Academy of Arts still manages to make modern art, design and architecture look amazing in it. Some more interior pictures below (pictures all from Open House)

Catering to all transport geeks, Crossrail is opening 5 of the constructions sites to the public. You can visit the following places to have a sneak peak into the Crossrail Construction works.

Crossrail has a dedicated site for Open House, see it here. 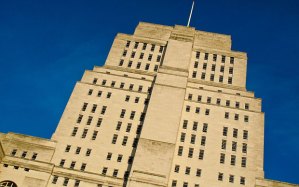 This building it the University of London’s Central Library. It was built in 1937 by Charles Holden (the father of the London Underground Station’s architecture) to house the library administration and at that time was the first large scale building in the UK to be heated by Electricity. Its a modernist building and it  served as inspirations for Orwell’s “Ministry of Truth” in his novel 1984 – as it housed the Ministry of Information during the second world war. Today (Saturday 19th) it offers informal tours.

Abbey Mills Pumping Station is affectionately called “Cathedral of Sewer”. Incredibly but true, this jewel of Victorian Architecture and Engineering, is one of the key Sewer Pumping Stations of the Victorian Sewage System designed by Joseph Bazelgette. It was built together with the London Sewage System in 1865-1868 and inside are 8 beam engines to generate enough power for the pumping for raising sewage between two Low-Level Sewers going into town and the Northern Outfall Sewer. During the open house weekend, it runs several tours each day, but you must pre-book via londonopenhouse@thameswater.co.uk with ‘ABBEY MILLS: Open House’ in the subject line.

Most people think of the modern Building by Rogers (who also was in the team of Architects that built the Centre Pompidou in Paris), which looks like its got its pipework turned inside out , but actually, you can visit both buildings of Lloyds Register-  the modern one and its 1899 ornamented brother built by Calcott. For guided tours and talks , you can simply stand in line today (historic lines have been long as its a favourite of the public). Lloyds Register is luckily proud of its historic heritage, so they have not only been a long-time participator in Open House Weekend, but designed a special brochure about their site, how it went from 1760 to today, how the buildings were constructed etc. – well worth a read. You  can download it here.