Welcome back to That’s London Baby! Sorry for not posting so long! London baby has been very busy exploring the Capital Ring in the weekends and was suffering from a bit of writer’s block as well- after all, while there are countless sections of the Capital Ring to write up, I wanted to offer a bit more variety…so that’s why today, instead of writing about the best that London has to offer, I want to write about the Wurst…(it’s old, ok. German humour, please keep on reading anyway :))

A recent visit to Stein’s Beergarden on Richmond Towpath has brought back the wonderful flavour of German Bratwurst into my memories. So if you need your very own Wurst-Fix, there are a few very good and diverse options to get sorted! The list below is by now means complete, and in the end, you can buy your Wurst at Aldi and Lidl (and its not even too bad). However, those places have helped me in the past to overcome potential homesickness. 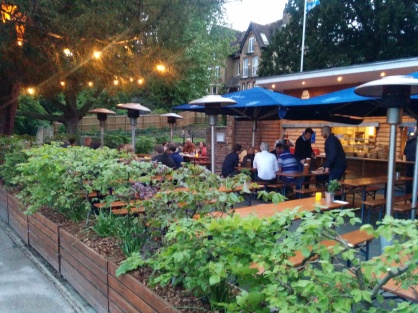 Stein’s started the first authentic German Beergarden in Richmond by transforming an old disused Kiosk on Richmond Towpath into a small Beergarden. They offer a full beergarden (and even a bit beyond) menu of authentic German Food, including various type of sausages, starters, and other mains. Their portions are very generous. The picture on top of this post is their largest Wurst Platter (£99) – according to the menu, its for 8 people! As you can see, they serve regular Bratwurst, Nuernberg Bratwurst, Krakauer, Frankfurter, Rindswurst and a special German style “Sausage Meatloaf” (Leberkaese). All of this in the pleasant surroundings of the river Towpath   (Richmond Towpath, TW10 6UX).

Due to the large success, they have opened a second branch in  Kingston in an old tea room, meaning they have a small restaurant inside space combined with a large terrace.  – 56 High Street Kingston. I have not been in this one but heard only good stories about it.

Of course, the mention would not be complete without the beer. In the Richmond Beergarden, due to licensing options, beer is only served in conjunction with food, not sure about Kingston.

Below a few more pictures from the recent visit 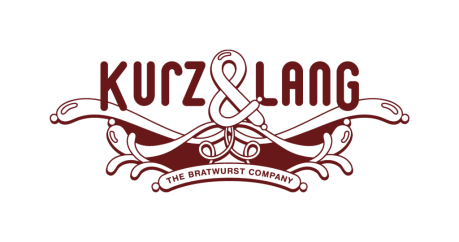 Kurz & Lang have a small snack-bar type restaurant at the crossroad of St. John’s Street and Cowcross Road in Farringdon. Even though located right next to Smithfield’s Meat Market, the Sausage is of course sourced in Germany. They serve a menu of various different Sausages (classical Bratwurst, Krakauer, Cheese Sausage etc.) for takeaway or for sitting on one of the few high chairs. Even though its not a classical sit-down restaurant, the quality of the sausages is very good. In fact, so good, that they have been working together with their supplier, a family owned business from the German state of Rhineland Palatine, to develop their own range of “Kurz&Lang” branded sausages, that can be ordered online, along with other Sausage accessories / sauces.

No list of German Sausage in London would be complete without a mention of “Herman Ze German”. From a small take-away shop in Charing Cross (19 Villiers Street), they have built a hipster sausage imperium with 3 restaurants (and counting). This is probably witnessed mostly by the fact that their head office has moved to Shoreditch, they sell the German Hipster Brand “Fritz Cola” for soft drinks, have developed their own branded sauce, and their online store sells branded “Herman Ze German” gear rather than sausages 🙂

They started in 2008, getting Sausage from the founder’s village butchery in the Black Forrest (now, they probably support a whole village economy…). In 2013, they opened a “proper” restaurant in Soho (33 Old Compton Street), taking on the neighbouring burger joints and in 2014, they branched out to Posh Fitzrovia (43 Charlotte Street).

German Deli – For buying your own sausage

Image Courtesy of the German Deli

If you simply want to shop some German sausage, German Deli offers you offline and online opportunity to fulfil many more German food desires beyond Wurst. They started with a small shop in Borough Market (3 park street) and an online shop to serve the rest of the UK. This has proven so successful, that they have rented a warehouse space in Hackney Wick (Unit 1, The Hamlet Industrial Estate, 96 White Post Lane) where they have now a bigger shop with all types of German Specialities.They also run a sausage stall in Borough Market, Whitecross Street Market (on selected days) and sometimes a stall in Hackney Wick (on busy weekends or special events).While I don’t know where exactly their sausage comes from, I don’t know, but its good quality. From their other meat i know that they are cooperating with local small German family businesses, so I assume its the same for the sausage. The only small min point I can think of is their insistence to serve the Sausage with Sauerkraut in the Bun (which in Germany is not common) and they refuse to give a discount if you just want the sausage 🙂